All databases contain the following personal details for each patient: first and last names, sex, age on admission in years and months, approximate year of birth and residential address at time of admission (with the exception of the Alexandra Hip Hospital admission registers).

There are two ways of searching the records by name: ‘Starts With’ or ‘Exact Match’. Click on the down arrow in the box to select the option you want to use if you do not see it displayed. The system automatically uses ‘Starts With’ unless you change it. This applies to both First Name and Surname fields.

You can search for a combination of First and Surname, or by either name alone.

‘Starts With’ searches for all names which begin with the text string you enter, so entering ‘starts with’ = Fred finds Fred, Fredk, Frederic and Frederick.

‘Exact Match’ searches for the precise word, so the same search for Fred using ‘Exact Match’ would only find those children whose name was entered in the registers as Fred.

The children’s names were entered into the database exactly as they appeared in the registers, so it is important when searching for a specific name to consider alternative spellings and abbreviations which may have been used. If you cannot find the children you are looking for, you can increase the chance of finding them by using the shortest form of the name in a ‘starts with’ search. If that fails, try using common ‘pet names’; Elizabeth may be shortened to Lizzy, while Henry often appears as Hry, Charles as Chas.

Searching by sex is simple; just select ‘Male’ or ‘Female’ from the drop down menu.

The registers often provide the child’s age in years and months, but search is restricted to age in years only. You can search for children of a specific age or within an age range, either by using the child’s Year of Birth or Age on Admission.

Year of Birth should be entered in full eg 1856. If you are searching for a range using Year of Birth, the search starts at 1 January of the first year entered and finishes at 31 December of the latest year entered.

If using ‘Age on Admission’ enter the age in whole numbers of years. Searching on a range of ages should be formulated in the same way as searches on Year of Birth: for all children age 10 on admission, search from 10 to 10; for all children between the age of 0 and 2 (or under 3 years old), search from 0 to 2.

Age starts at 0, for children admitted under one year (for such children their exact age, in months is shown in the display page). All the hospitals in HHARP had rules restricting access by age. In theory none accepted children under two, but the practice was quite different. They were stricter about the upper limit of 12, but there are a few records for admissions over this age limit. The eldest patient was actually a nurse at Great Ormond Street who was admitted to the Hospital in 1868 with scarletina. She was entered as Harriet ‘Nurse’, and was 30 years old. Although many nurses succumbed to a variety of infectious diseases, Harriet was the only one whose illness was recorded in the admission registers.

The Evelina and Alexandra Hip Hospital records sometimes include information on parental occupation. This information is not searchable but is displayed in the Full Record and in the downloaded file when available.

This is a keyword search which looks for the specified term anywhere in the Residence field: eg, ‘Oxford’ will find Southern St Oxford, Oxford Street, Oxford St, Oxford Crescent, and the city of Oxford.

This field can be used to search for addresses both in London and outside. The addresses mirror the entries in the registers, including any abbreviations, so to get the best results it is advisable to either use single key words, or to consider using street abbreviations if the address you are looking for is not found. You can search for specific towns and cities outside London here. Combining a search for ‘Oxford’ in the Location field with ‘Outside London’ in the Registration District box, will enable searches outside the capital to be narrowed down. Records relating to children from outside the metropolitan area can be identified by the term ‘Outside London’ in the Registration District column of the Results Table. Further work in being carried out on the addresses outside London to make searching for them easier.

In this database the definition of London is the Metropolitan London area as defined in the Act for the Better Management of the Metropolis, 1855, and, therefore, many places which would now be considered part of Greater London, e.g. Highgate, Finchley, Chiswick, Croydon, etc. are classed as Outside London. See Registration Districts for a list of the 1881 Districts which were part of the 1855 definition of London.

This field is only available for searches on London addresses (see location hints for definition of London in HHARP). It has been constructed as a search aid for this database and contains a standardised version of the London street names given in the hospital register. Street names in this field are given in full. A search for ‘Abbey’ finds all streets beginning with that word; ‘Abbey Road’ finds records with that street in the address, but ‘Abbey Rd’ will find no records, as all instances of Abbey Road have been standardised to the full name.

Registration District (London and Glasgow only)

Registration District and Sub-District (for London Addresses) can be used to find records in specific areas of London and Glasgow . They are useful for family historians when looking for individuals where the exact address is not known. They are also useful for local historians and medical historians who want to examine admissions by geographic area.

Search these fields by selecting from the drop down menus.

Click here for a map of Metropolitan London Registration Districts.

Addresses outside London have not been standardised or assigned to a Registration District. A keyword search using ‘Location’ must be used to find records relating to children from other parts of the country.

Registration Districts were administrative regions created in 1837 for the purpose of civil registration of births, deaths and marriages. Each District was divided into Sub-districts, each of which had its own Registrar. The districts used in this database are those which existed in 1881, and addresses have been assigned to a district according to 1881 census data. The database covers the 30 London Registration Districts and 130 Sub-districts which fall into the 1855 definition of London. 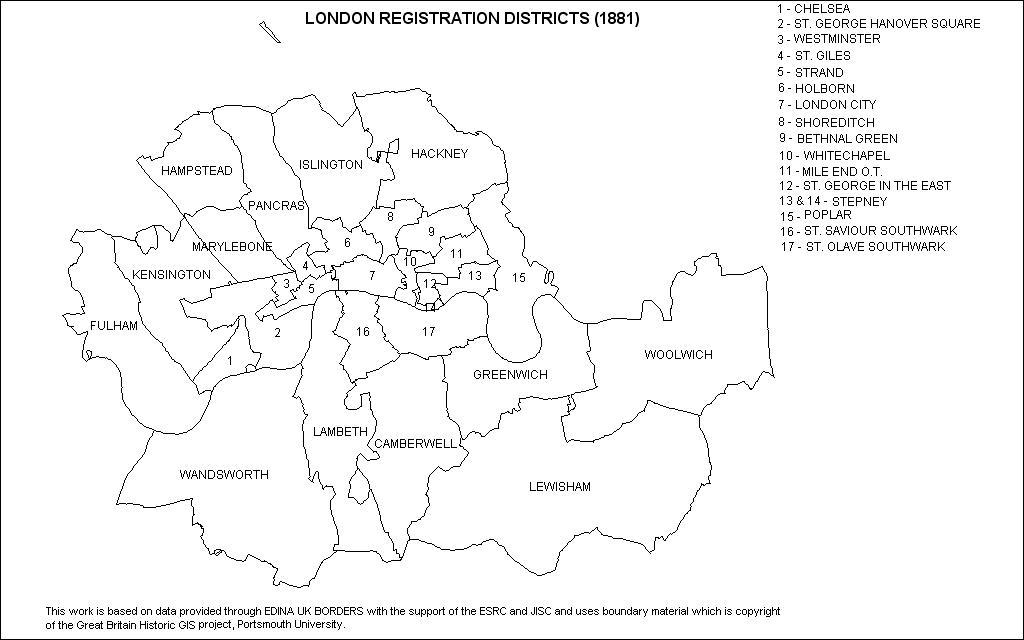