When Great Ormond Street Hospital opened its doors in 1852, it did so against considerable opposition from the medical establishment and lay opinion that decreed children were not suitable objects for hospital treatment. It also had to convince London’s poor parents that submitting their children to the hospital’s care was for the best. This was no mean feat at a time when London’s poor housewives had well-established networks of local support in times of family sickness.

In the earliest days of the hospital’s life, certain parental responsibilities were still expected to be fulfilled. For example, mothers of in-patients were charged with undertaking their childrens’ laundry. Parents were expected to supply decent clothing for all but infectious fevers, and to take away the dirty clothing and linen for washing. As the hospital grew, however, and the dangers of risking the export (or import) of infection through the clothes and bedding became appreciated, this task was gradually assumed by the hospital itself.

Visiting hours for parents were strictly controlled. From 1880, mothers were allowed to visit on Thursday afternoons, Sunday being known as ‘fathers’ day’. The grief of the children on their parents’ departing was dealt with by a different ward routine on visiting days; as soon as the visitors had gone, the children’s tea was brought in, with extra treacle or sugar on the bread. In later years, the distress of the children was silenced (if not assuaged), by immediately dressing them in velvet and silk, and taking them to the hospital chapel for a hymn service. Brothers and sisters were not allowed to visit patients until the 1960s.

Visiting parents were subjected to a strict set of rules. They were forbidden from bringing food in for their children, apart from sponge cakes, and were expected to behave with propriety at the child’s bedside. The hospital was strict about punctuality, but did not always make it easy for mothers to comply. No allowance for family circumstances was made in setting the visiting times, and perceived misbehaviour of the visitor could result in the child being discharged.

Having a large family could mean that mothers were unable to attend each week, and parents living at some distance from the hospital could find it impossible to see their child throughout its hospital stay. Mothers found ways round this – often relatives living in London or family friends were commissioned to visit the child – and mothers coming up to London especially to see their children could insist on more relaxed visiting hours. 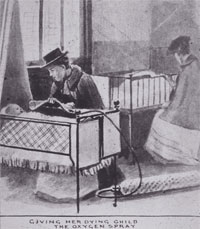 When a child was dying, mothers were sent for, and admission to the ward allowed at any hour of the day or night, but, apart from mothers who were breast-feeding patients, this was the only time when unlimited access to their children was allowed.

An entry in the House Committee Minutes from 1894 illustrates how intimidating the Hospital could be for parents of sick children.

A mother, who had been instructed by the Hospital to come in to see her young son, was accosted by the Hall Porter on her arrival and prevented from entering. She was accompanied by a lady from Guildford High School, who took offence at the tone in which she was addressed by porter, as she recorded in her letter of complaint:

"Don’t get your fire up, my dear", was the outrageous reply to my simple statement, and when I … turned towards the staircase he grasped my arm. "Very well, I will wait to see the Lady Superintendent", I said turning to where I saw the sign. "That’s private. Can’t you see," he said roughly again, familiarly grasping my arm, "Now you shan’t go up at all. I’ll see what the book says, and that’s all you shall know." On looking the boys name up in the book, he said, "oh, the boy’s better, that’s all you need to know. Now you can go, do you hear? I’m the porter here – and you can just go. The boy’s better."

The poor mother never saw her boy that day and terrified that her complaints might rebound on her young son, she begged her lady companion, "please, please don’t say anything about it, maybe they won’t be so good to Frankie if you do!"

It would take another forty years for the medical establishment to fully appreciate that the separation of a child from his or her home, even to the best children’s hospital facility that could be created, caused inordinate distress to the child. It took another few decades for the principle of close parental involvement in the treatment of the hospitalised child to be accepted.

In 1959, The Platt Report, 'The welfare of children in hospital', sent shock waves throughout the hospital establishment in Britain.

"Greater attention needs to be paid to the emotional and mental needs of the child in hospital, against the background of changes in attitudes towards children, in the hospital's place in the community, and in medical and surgical practice. The authority and responsibility of parents, the individuality of the child and the importance of mitigating the effects of the break with home should all be more fully recognised."

Sister McElnea, the GOSH cardiac sister, believed strongly that the separation of parent and child was barbaric, and pushed very hard in the 1960s for extended visiting and the closer involvement of parents with the medical care of their children. With the backing of Dr Richard Bonham-Carter, and support from patient and child welfare organisations, she was successful; brothers and sisters were allowed to visit from 1962 and six years later, unrestricted parental visiting hours was introduced. Thereafter, wherever possible, the parents of GOSH patients helped look after the child, and were trained in techniques to continue care at home.