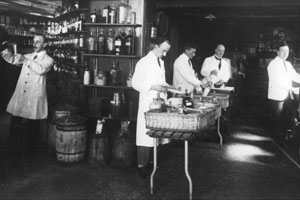 Arsenic to Zinc: the Hospital Pharmacy

Today, the Pharmacy dispenses thousands of prescriptions to in and out-patients, and is one of the busiest departments of the Hospital. In 1852-1853, Great Ormond Street’s Dispensary (as it was then known) spent a grand total of £42 on drugs and surgical instruments, which was one-sixth of the entire direct expenditure on the patients.

The Hospital signed its first drugs contract in 1852, thereafter being among the first institutions to try out (and perhaps endorse) the huge number of patent medicines that flooded the market in the Victorian era. Treatment in the 19th century could be surprisingly homely, with eggs, brandy and wine being prescribed for debilitated patients. The beer and wine register records enormous quantities of alcohol being consumed on the premises, and perhaps not all by the patients?  Arsenic (in minute quantities) was given to patents suffering from everything from congenital syphilis to Sydenham’s chorea. Purgatives (most commonly mercury chloride and cascara) and bleeding were common treatments, and opiates were the usual recourse for patients who were required to lie still. Almost every patient was given regular doses of castor oil and cod liver oil. The hospital spent so much money on these items, that they helped form a co-operative with seven other London hospitals in the early 1900s in order to buy them at cost price.

It would seem that even in the late 19th century, pharmaceutical companies may already have been employing subtle marketing strategies. In 1887, the Medical Committee accepted an offer of £5 worth of free drugs from the pharmaceutical company Burroughs Wellcome. The Committee chose to receive the following products: Fellow’s Compound Syrup of Hypophosphites (a tonic), Gelsemium (a botanical product), Terebene (a multipurpose compound used as an expectorant, an antiseptic and in inhalation treatment for phthisis), Keplers Malt Extract, and Peptonizing Powders (a digestive aid). Was this an unalloyed act of charity of Burroughs Wellcome’s part? Possibly, but then again, you rarely get anything for nothing, even in the Victorian world. In December the same year, it appears that Burroughs Wellcome asked for an endorsement from the Hospital. The details of the request were not recorded, so it is difficult to say conclusively that it was linked to the ‘gift’ of drugs earlier in the year, but the Medical  Committee recorded that, ‘this Committee was unable to give any such recommendation as the one asked for’.

The pharmacy must have been rather a dangerous place to be when the highly-explosive potassium chlorate (used extensively as a sedative) was being prepared. Weak hydrochloric acid was used to clean surgical sites, and cocaine was a major weapon in pain control. The dispensary may have occasionally smelt like an old-fashioned herbalist’s, with lavender oil, tincture of orange peel, cinnamon and ginger, acacia essence and caraway water being essential elements of the pharmacist’s shelves. 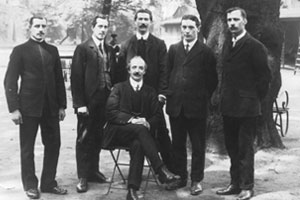 The pharmacy was run by the Dispenser. The hospital’s second Dispenser was William Gloyne. He had had a distinguished service in the Army before coming to the children’s hospital, where he was not only put in charge of the dispensary, but  - after 1858 – also responsible for the running of the second hospital building. He toiled far into the night, occasionally writing to the Management Committee to complain of overwork. No heed was taken of him, even after he became seriously ill with jaundice and bronchitis, and one morning in early summer 1863 he was found slumped dead in his dispensary. The dispenser was very well paid (£120 a year in the 1850s – twice the salary of a senior London clerk), but clearly not enough to save him from overwork.

A happier fate was enjoyed by the Hospital’s most colourful pharmacist.  J. Wycliffe Peck served the institution from 1894 (when he came to cover holiday leave) until his retirement in 1936. Mr Peck was fond of pointing out how hard he worked for the hospital, and his labours were acknowledged in the writings of Denis Browne (one of the Hospital’s most prestigious surgeons of the 20th century) and other senior hospital staff. He prided himself on his inventiveness, and confessed to looking for some inspirational device or formula, ‘to astonish Dr Batten’. Wycliffe Peck patented a method of creating a non-flammable celluloid for splints, which he called Pexuloid.  At a time when many children suffered from bone and joint malformations, and when coal fires were the norm, it is easy to imagine the need for such a material. It was a minor miracle that his creation reached the Patent Office at all, as he had to fight off demands for the formula and method.