In 1859, GOSH took the innovative step of establishing an infant nursery in one of its newly acquired buildings. The purchase of number 48 Great Ormond Street was possible due to the fund raising efforts of Charles Dickens and others, in response to the hospital's near bankruptcy in 1857-8. In October of 1858 the Board of Management proposed that the ground floor of the new building be adapted to house an infant nursery, a move inspired by the examples seen in Paris by GOSH's founder Charles West.

The nursery was never intended to be a permanent feature, but a source of modest income from the working families who would use it until the Hospital could find other ways to increase its resources. It also provided a means, in the days before formal nurse training, of introducing female recruits to working with children, some of whom might then move on to the regular nursing staff. It opened in March 1859, and was moderately successful, continuing until 1864 when space pressures and an improved financial situation allowed the building to be entirely used for patient treatment.

The 1859 Annual Report observes that:

"The ground-floor of the new house, the entrance of which is quite distinctive from that of the Hospital, has been converted into an Infant Nursery, for the reception, during the day-time, of Infants and Children at an earlier age than that at which they are admissible to Infant Schools, and whose mothers are compelled to get their living away from home. Such establishments have had great success in Paris, and, even on the limited scale on which they have been tried in this country, have proved a great boon to the poor. The ample space now at the command of the Committee has enabled them to make the arrangements of this Nursery more complete than was practicable in other institutions of the same size in the Metropolis. They trust that, while it will be in great measure, if not entirely, self-supporting, it will also serve as a model for others, and prove invaluable as a Training School for Pupil Nurses.

This arrangement is, however, only temporary, and will cease the instant that the finances of the Hospital permit the Committee to convert these rooms into Wards for In-Patients; and the Nursery can then be removed without any loss of its utility to the spacious Outbuildings of the Institution". 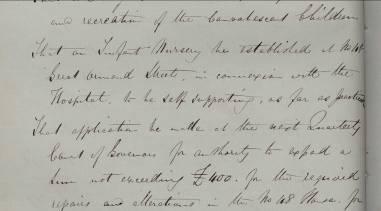 The admissions register survives, and reveals that of the 458 children admitted to the nursery, the great majority lived within a relatively short distance of the hospital in the Holborn, Clerkenwell, Camden and Hoxton areas. The registers record the occupations, often of both parents, and reveal that the applicants were largely of the skilled working class, many with working mothers. 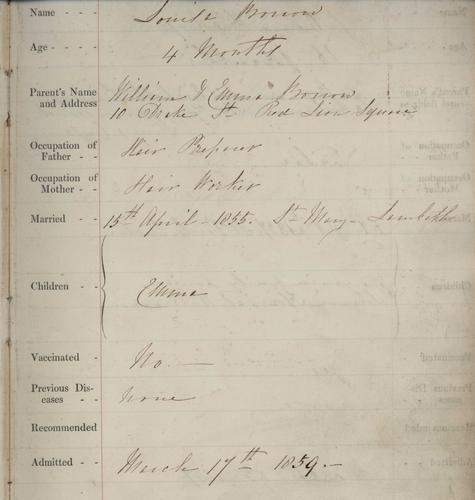 The registers also record other family details: the parents' names and address, the date and place of their marriage, the names of the applicants' siblings, as well as information on the child's vaccination and previous illnesses. 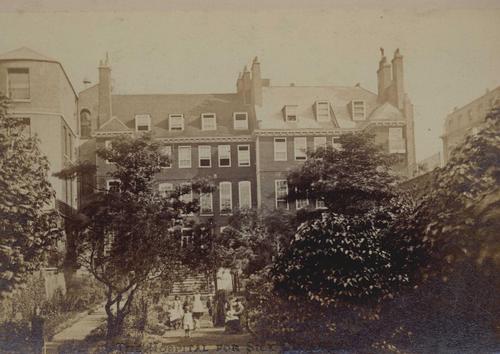 Garden of No 48 Great Ormond Street

The surviving Board minutes shed light on the running of the nursery, and note the addition of a contributions box in the hall in June 1860, and the following month the Board felt it was 'not advisable to introduce any system of charity'. Some debate is also evident at this time about the admission of illegitimate children, although this was approved of, with reservations, in two cases, following recommendations for the children by a Miss Ridley and the Curate of St James' Piccadilly.

The success of the nursery is described in the 1860 Annual Report:

"The success of the Model Nursery in the new house, No. 48, the opening of which was announced in the last Report, has amply justified the hopes of its promoters. A large and increasing number of Parents avail themselves of its advantages, and express themselves most grateful for the care and attention bestowed upon their Children, who indeed almost invariably improve in health and appearance when sent there for any appreciable period. The diet furnished to the Children is always of the best quality, and therefore the charges, though high as compared to other Nurseries where food is not provided, can do little more than pay for the cost of the food consumed; but the Committee feel that, showing how children should be treated to keep them in good health, is hardly alien to the main purpose of the Institution, the restoring of them when sick. Indirectly the Nursery, by the interest it excites, attracts no small number of friends to the Hospital. The Committee have to regret, that at present scarcely any young women have availed themselves of the opportunity which the Hospital and Nursery could afford them, of obtaining experience in the care and management of Children; but as they are very confident that the Institution might be a most valuable tool of instruction to young Nurses, and as it is proposed that they should be received without any fee, and boarded and lodged in the Hospital on payment of a weekly sum of only six shillings, the Committee again call the attention of the Governors and Subscribers to the advantages thus offered."

The nursery was closed in 1865, the Report noting:

"It was not without regret that the Committee decided upon giving up the Nursery, for there can be no doubt that, in addition to serving as the model for such institutions in general, it led many persons to visit the Hospital, who eventually became supporters of it. On the other hand, the urgent demand for more space in the Hospital furnished a very strong argument in favour of the alteration, which has undoubtedly proved a very beneficial one to the in-patients. The Committee have only to add, upon this point, that as the beds and other articles of furniture in use in the Nursery were either specially given, or purchased with money specially given, to the Nursery, they considered that the most appropriate application they could make of them was to present them to the promoters of a similar institution, recently established in the parish of St. Mary-le-bone."

The admissions register of the Nursery has been fully transcribed.

The full dataset (482 records) can be requested here.