When Charles West failed to mobilise support for an in-patient facility at the Waterloo Dispensary for Sick Children, he did not give up hope of realising his dream. Through his network of colleagues, he learnt that Dr Bence Jones, an eminent London physician, was also of the opinion that London’s children needed a hospital dedicated to their care. The two men met, agreed their common objective and, using Bence Jones’s superior social contacts, set about raising support among London’s influential class. As a result, on 30 January 1850 a group of nine pioneers, from the world of medicine, philanthropy, banking and society, met at Bence Jones’s house in Lower Grosvenor Street to turn West’s dream into reality.

The members of the Provisional Committee were a committed team whose skills and contacts supported the socially-awkward Charles West in getting the very idea of a children’s hospital accepted by medical professionals and the public. For over two years, they lobbied, persuaded and proselytised on behalf of the proposed institution. The medics countered opposition within their profession and - from nothing - built up an impressive list of clinical supporters. The laymen answered criticism from those who claimed that a children’s hospital would relieve parents of responsibilities to care for their sick offspring, and would be a dumping ground for unwanted children from London and elsewhere. They were also the principal fund-raisers, enlisting sufficient contributions from their friends and acquaintances, so that the dream could take concrete form.

You will notice that the Provisional Committee was made up entirely of men. It was unthinkable in early Victorian society that women should take part in the heady world of committees. Their role was deemed subordinate to that of their menfolk. Nevertheless, the creation of the ‘nine worthy gentlemen’ into one body had more than a little to do with behind the scenes efforts of their female relatives and friends.

That, however, is another story. 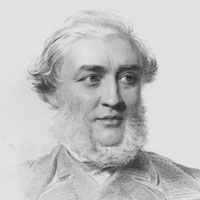 The most important of the early creators of the Hospital, Henry Bence-Jones was a chemist and physician with all the social and medical contacts that Charles West lacked. With a huge medical practice and a vast network of wealthy friends, his home in Grosvenor Street was the venue for the meetings of the Provisional Committee from January 1850. He it was who brought together a group of influential medical and lay men to prepare the foundations of the Hospital.

A solicitor with a practice in nearby John Street, Edward Futvoye was already actively involved in hospital charity work in 1850, in his capacity as honorary secretary of the Women’s Hospital in Red Lion Square. He was a stalwart supporter of Great Ormond Street, remaining on the Committee of Management of the Hospital until 1890, and regularly offering his home in Guildford for fund-raising meetings.

A partner in a banking house, Joseph Labouchere became treasurer after Joseph Hoare (a scion of a banking dynasty himself) felt he had to resign following family objections to his association with an enterprise that was potentially  in competition with the Royal Universal Infirmary in Waterloo. Labouchere’s firm, Williams, Deacon & Co, remained the bankers to the Hospital for many years, and a partner of the firm was always honorary treasurer to the Hospital until the advent of the National Health Service in 1948.

The son of one of the Duke of Wellington’s generals, Henry Allen Bathurst seems to have escaped the eccentricity that marked his family, and served as chief fundraiser, publicist and advocate of the Hospital until 1884, when he resigned in order to take up the post of Registrar to the Admiralty Court. At a Hospital fund raising dinner in February 1866, Alexander Beresford Hope praised him; “…he has been the life and soul of the hospital from the first, and without him, we know not what would have become of it.”

Captain Frederick Holland was the cousin of the novelist Mrs Gaskell and a friend of Charles Dickens and his family. His career in the Royal Navy was cut short by sickness, probably caused by the rigours of serving in the West Indies. His health made him a short-lived active supporter of the Hospital, but he and his family remained committed financially to the enterprise after their move to Ashbourne Hall in Derbyshire and until his death in 1860 at the age of just forty-six.

Related to Frederick Holland by marriage, William Hunter Baillie was the son of Matthew Baillie, one of the most famous physicians of the late 18th and early 19th centuries, and was related to John and William Hunter. A man of independent means, he served on the main Management Committee for only a year after the foundation of the Hospital, but was still on the list of subscribers in his nineties. He supported many other medical charities, including the Middlesex Hospital, but Great Ormond Street seems to have retained a special place in his heart.

The son of the Duke of Northumberland, Percy’s social and family connections played a vital part in raising the profile of the proposed venture, and gaining the support of the most influential members of the aristocracy in the early years of the Hospital’s life.