Fresh Air, even when it's Freezing

Think of Great Ormond Street these days and one thinks of a resolutely urban environment, where every inch is guarded jealously by its occupants. It is a hospital that is nearly all ‘inside’. True, there are glimpses of green, but these are tiny oases in a built environment of high and unforgiving density. Queen Square is the nearest equivalent to hospital grounds in the locality, and even there the Children’s Hospital competes with neighbouring institutions for every blade of grass.

But it was not always like that. When the Hospital opened in 1852, it not only had a substantial garden, but it rented extra green space from the Foundling Hospital. 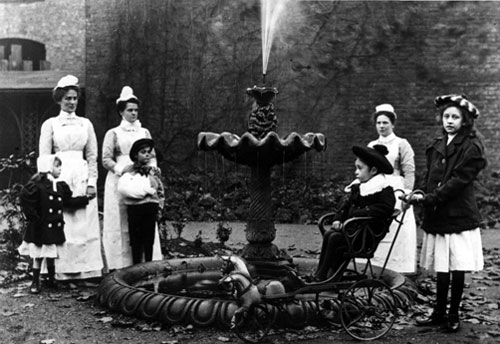 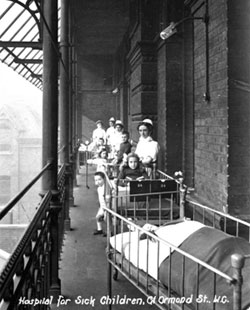 Ambulant patients were encouraged to go into the garden as much as possible, and it was where the nurses grabbed a few minutes’ break, as well as the backdrop to the annual Medical Officers’ photograph. In the early days the garden was, in effect, the convalescent ward of the Hospital, and the place for rest and recreation for the adults.

Alas, as the Hospital grew, the green space had to be sacrificed. A dead house (mortuary) was built in it in the mid 1850s, and the 1875 building spread to take over much of the remainder of its tree-filled tranquillity. By this time, Cromwell House, the convalescent home in Highgate, had been opened for seven years, and its large garden was used as a therapeutic aid for the recovering patients. To make up for the lack of outside green space at Great Ormond Street, the Victorian building had balconies running its length. Patients were wheeled out in their beds, no matter the weather, to enjoy the health-giving properties of the coal-filled, manure-scented, polluted atmosphere of central London.

Patients recovering from infectious diseases, or who suffered from otitis media or pulmonary conditions, were deemed to benefit particularly from a few hours on the balconies. The open air principle had been advocated by the Metropolitan Asylums Board, which was responsible for hospitalising Londoners who had contracted notifiable diseases, most particularly smallpox. As well as treating people on a ship on the Thames at King’s Reach, they opened up an open air camp at Darenth in Kent, where patients lay in bed in tents that had at least one wall open to the elements.

During the Edwardian era, the open air craze grew, thanks to developments in Germany and the United States. Open air schools, first opened in Deptford by committed Socialist Margaret McMillan, sprang up all over the country. Children who failed to thrive, or who had respiratory problems, were sent in their thousands to these institutions, where no amount of snow or hail halted the lessons.

Tadworth Court, the Great Ormond Street convalescent home that had opened in Surrey in the 1920s, had specially-built pavilion wards in the grounds, with one wall consisting of sliding glass doors, to allow open-air treatment to be practised. The extensive grounds had lots of play equipment, and the Tadworth donkeys were there to ride and to be made a fuss of by successive patient intakes. 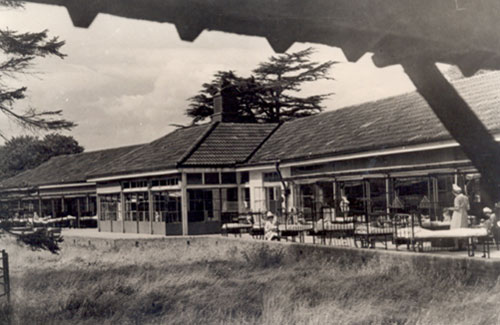 Meanwhile, back in central London, the new Southwood Building (complete with balconies), opened in 1938 and covered what was left of the old garden. Patients continued to be wheeled out daily for a dose of ‘fresh’ air. People living in the neighbourhood complained vociferously about the noise from the Hospital balconies, but the medical and nursing staff were convinced that open air treatment aided recovery. For the patients, the balconies offered a chance to see the outside world, and also enabled them to get rid of unwanted meals. The daily dinner diet at Great Ormond Street throughout the first half of the twentieth century consisted of mince, watery boiled potatoes and greens, followed by tapioca one day, and sago or rice pudding the next. For a child who might be in hospital for months, mealtimes must have been dull beyond description. Those who objected to some (or all) of this monotonous diet, could throw the contents of the plate off the balcony, and watch it splat on the glass roof of the balcony below. Those on the lowest floor could target passing pedestrians, which was much more fun.

For the adults who worked at the Hospital, balcony breaks were not encouraged, and so the roof became the favoured outdoor spot for generations of doctors and nurses. Above the soot and sordidness of London’s air, they could catch their breaths, carry babies to be photographed for anxious parents, and escape into a quiet space for a few minutes.

Today, thanks to plate glass walls, and clever architectural sight lines, there are small glimpses of the outdoors at Great Ormond Street. We gaze longingly at the Japanese roof garden, acknowledge the planting outside the Chapel, or grab a few minutes on the Patio outside the Orangery. But, oh, how wonderful it would be to transport ourselves back to 1852, to sit under the spreading plane tree and escape into GOSH’s own green and pleasant land. 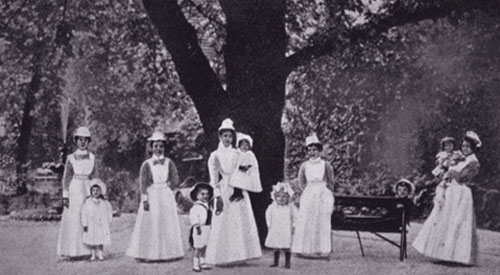