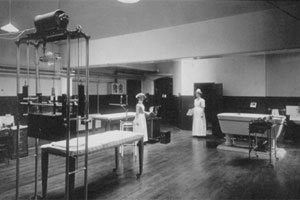 By the end of the nineteenth century, the Hospital for Sick Children’s range of treatments had expanded considerably. Aseptic techniques and the development of anaesthetics allowed complicated operations to be undertaken, and the hospital pharmacopoeia contained a growing number of remedies in addition to the age-old standbys of fortified wine and brandy. With the twentieth century, came the first high tech developments.

One of the innovations of the new century was the Electrical Department, run almost entirely by specially-trained nurses. Electrical stimulation, otherwise known as Galvanism or Faradisation (after the English father of electricity, Michael Faraday), was used in patients suffering from wasted or paralysed muscles. It had been gaining favour throughout the 19th century, largely through the work of French scientist Guillaume Duchenne du Boulogne. Galvanism was a painful process, and it was not until the late 1890s that it was discovered that increasing the electrical frequency actually reduced the patients’ discomfort. Discomfort, of course, is the physician’s euphemism for excruciating agony. Electrical treatments on offer to the patients at Great Ormond Street ranged from the stimulation of limbs, to wax baths for impetigo and ringworm.

Wilhelm Roentgen’s discovery of X-Rays in 1895 opened up a whole new world of possibilities of examining the body, and thus for the development of new treatments. The indefatigable and ever-curious hospital pharmacist, J. Wycliffe Peck, took X-Ray photographs of his hand, as did many early experimenters, and we still have the image of his digits in the hospital archive. The new technology was deemed to be a great diagnostic boon, and in 1902, the hospital decided that, “…the establishment of a Roentgen Ray department has become a necessity”. The hospital’s first radiographer, Dr Morton Smart, was appointed the following year. His successor, Dr William Ironside Bruce, was – like many of the pioneers of the new science – adversely affected by radiation, and died prematurely as a result. In 1936 a memorial was erected in Hamburg to 169 early pioneers of X-Rays from fifteen countries who suffered radiation injury or lost their lives due to their work.  William Ironside Bruce’s name is commemorated above the inscription:

"They were heroic pioneers for a safe, and successful application of x-rays to medicine. The fame of their deeds is immortal.” 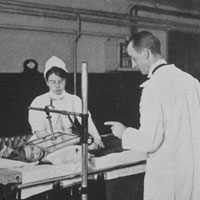 The X-Ray Department became an important part of routine diagnosis and treatment at the hospital, to the dismay of older clinicians, who felt that their diagnostic skills were being sidelined, and that the use of this new technology was indiscriminate and often inappropriate. In the late Edwardian era, we have identified six patients who were admitted specifically for X-Rays, three of who had previously presented with congenital dislocation of the hip, and had on that occasion been discharged cured or relieved. They may have been brought in for X-Ray to follow up on their treatment and check the hip joint was remaining in place. The other three appear to have been admitted only once, specifically for an X-Ray: the only boy in the group had an old fracture of the tibia, while another patient had tubercular disease of the joints. The X-Rays may have been used to confirm diagnosis or to check on progress of a condition; or they may have been experimental, part of the learning process of using this new technology in diagnosis.