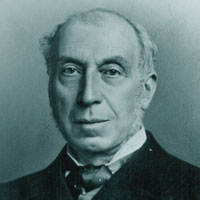 Walter Butler Cheadle was born at Colne, Lancashire, in 1835. He was the son of the Reverend James Cheadle, and was educated at Bingley Grammar School, Yorkshire, and Cambridge, where he was a keen rower. After a spell at St George’s Hospital, he took the MB degree in 1861.

Walter Cheadle was a man of action. In 1862, in the company of Viscount Milton, he set off to explore the then little known western parts of Canada. Their published account of the adventure, complete with near-starvation, went into nine editions by 1901. In 1864, he returned to Cambridge, and gained his MD by 1865. His progress through the Royal College of Physicians was assured, and his professional life began with election as physician to the Western General Dispensary in 1865, and assistant physician to St Mary's Hospital in 1867. His association with St Mary’s lasted for forty years, serving as dean of the medical school for four years.  He was generous to St Mary’s, endowing the Cheadle prize and a gold medal for an essay on clinical medicine.

In spite of his allegiance to St. Mary’s, he is better known a pioneering children’s physician. In 1869 he joined Great Ormond Street as an assistant physician, and stayed until 1892, when he became honorary consulting physician. His large private practice concentrated on children, and most of his writings related to the diseases of childhood. He was a big man, but had a kind nature, and children naturally warmed to him. He published seminal works on the relationship between nutrition and child health, and his interest in childhood rheumatic conditions inspired his protégé, John Poynton, to research this field.

Dr. Cheadle married twice, his second wife being Emily Mansel, whose father was the inspector of Queen Victoria's Jubilee Institute for Nurses. He was a champion of women’s entry into the medical profession, lecturing at the London School of Medicine for Women. Cheadle’s last years were plagued by illness, which stemmed from contracting dysentery while on a professional visit to Canada in the early 1880s. He died on 25 March 1910 at his home, 19 Portman Street, Portman Square, London.

John Poynton, recalled his mentor in his manuscript memoirs:

“Dr. Cheadle I knew very well indeed, and lived in his house for some years, helping him to look after his second wife, who was slowly dying of renal disease. I also looked after him in his long last illness in 1910. He was a great big Yorkshireman, and one of those men who became more handsome in his later years. He had explored with Lord Milton the N. W. Passage across Canada, and often showed me the belt he had pulled up inch by inch when they were nearly starved. (vide, ”The N. W. Passage” by Milton & Cheadle). He was very difficult to know, and when I lived with him practically a recluse. His discovery of Infantile Scurvy and his work on child Rheumatism and Cirrhosis of the Liver were well-known and classical. He was immensely popular with students, patients and children, and with all with whom he worked. His great hand would almost obliterate a child, but that child would be shouting to him to give him a sweet. He had great troubles but was indomitable. By nature very shy, he had a loud voice and with patients was very human and encouraging. His experience was very extensive and he had a natural clinical gift, not realised by many. Indeed he was one of the greatest physicians I ever knew, and his superb knowledge of illness was never recognised as I should have expected, partly because he was in reality a sad man who cared little for any advertisement, and was by nature aloof. His size, his large features with fine blue eyes, and white hair made him a conspicuous figure in any assembly. His last days were sad and lonely after the loss of his wife, and his last illness long, painful and altogether distressing.

Dr. Cheadle presented to Annie Zunz ward (then Alice) a very charming baby’s cot in memory of his wife. It was difficult to nurse a child in and required much polishing. I remember it well in the middle of the ward. To my horror it was “scrapped”. The very fact that it was a memorial to one of the hospital’s greatest physicians, and had been in his ward, made me mentally sick to hear of its fate, and is a warning to all of the forgetful­ness of even intelligent people, and of the instinct to destroy what is a little difficult to keep, though that is a charming gift, or a scrap of history.”