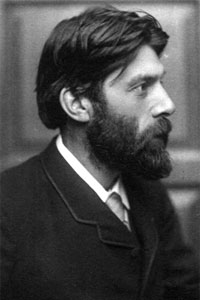 Great Ormond Street has fostered many doctors who have gone on to fame (if not fortune) in their chosen fields, but it has also been the early home of several prominent men and women whose celebrity was destined to be outside the realm of medicine. One of these was the Poet Laureate, Robert Bridges.

Born into a large family at Walmer, Kent, in 1844, Robert Bridges’ childhood was idyllic until the death of his father when he was nine years old. On his mother’s remarriage, he was sent to Eton, where he began to write poetry, as well as display an aptitude for sports. He spent four years at Corpus Christi College, Oxford (1863–7), during which time the Darwinian debates on the origins of all living creatures were creating a sensation, and he felt his own hitherto strong Christian faith begin to waver. After graduating, he travelled to the Middle East, and it was during this trip that he decided on medicine as his future career. In preparation, he spent eight months in Germany, learning the language in which so many scientific papers were published at the time, and registered at St Bartholomew’s Hospital at the age of twenty-five.

He failed his final medical examinations in 1873 and, so spent six months in Italy, waiting for permission to re-sit them, and also spent time studying medicine in Dublin. He passed the exams at the second attempt in December 1874, becoming house physician at Bart’s. In 1876 he went to the Hôpital de la Pitié in Paris to study. Andt hat same year he was elected a member of the Royal College of Physicians. All the while he was writing and publishing poetry.

When he took up the post of casualty officer at Bart's, he found the work both exacting and exhausting, reporting that he saw 31,000 patients in one year there. In 1878, he joined Great Ormond Street as casualty officer and also took up a post as assistant physician at the Royal Northern Hospital, Islington. He was highly critical of the organisational arrangements at Bart’s, and it is probably just as well that he had the other two posts, as Bart’s did not offer him any further advancement after his views were published and attracted adverse publicity to the hospital.

He forbore from criticising publicly the Outpatients’ Department administration at Great Ormond Street, but he did write to Dr West about the possibility of charging for consultations. Presumably this would have had the intention of reducing the daily tally of consultations, but the matter was not resolved by the time he left the hospital.

Between his first clinic on 5th January 1877, and his last recorded session on 11th October 1881, Bridges treated thousands of out patients, and admitted 511 children onto the wards. Of those patients, over fifty per cent had lung diseases.

Bridges was an unusual doctor. Immensely conscientious as a physician in the Outpatients’ Department, he was acutely sensitive to the sufferings of his patients. This sensitivity was undoubtedly influenced by the early deaths of four of his brothers and sisters. His tendency to spend far longer with each patient than most doctors, also made his workload considerably greater than that of his colleagues. This seems to have both affected his health, and fuelled his poetry.  It was while he was at Great Ormond Street that he published one of his most affecting poems, ‘On a Dead Child’. The poem describes a doctor performing ‘the last duty’ for a young patient  whom he had treated, “perfect little body, without fault or stain on thee”, and imagining for a moment that the patient had put his hand in his, as he used to do.

The records at Great Ormond Street show him requesting regular leave of absence to go to Italy for his health. He was prone to lung disease (exacerbated by his long working hours) and he developed pneumonia in the summer of 1881. He worried that his poor memory would eventually result in harm to his charges, and this may have influenced his decision the following year to give up medicine in favour of writing.

Bridges’ later life, while continuing to be marked with the loss of more siblings and a beloved daughter, was dominated by poetry, literary criticism, and translations of hymns that are still in use today. He became Poet Laureate and was awarded the Order of Merit, working right up to his death at the age of eighty-six in 1930. He attained celebrity with a new generation of poetry readers in 1928, when a long poem, Testament of Beauty (written after the death of his daughter), became an overnight sensation. He remained a particularly sensitive observer of the human condition until the end, a quality that was certainly enhanced by his time at Great Ormond Street.