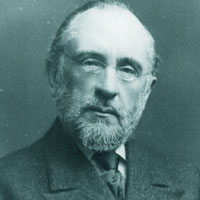 David Bridge Lees was born in Manchester, and attended Owens College before studying at Trinity College Cambridge. He gained a first-class honours degree in mathematics and natural sciences and won the Carus prize for Greek and Divinity. He undertook his medical studies at Guy’s Hospital and in Vienna, holding house appointments at Guy’s and at Great Ormond Street. He returned to Manchester briefly to teach at his old school, but came back to London permanently in 1876, to take up a post as assistant physician at Great Ormond Street. He was made a full physician in 1890. As was common at the time, he also held posts at Charing Cross Hospital, and then St. Mary’s. He lectured at St. Mary’s, (where he worked on rheumatism with Dr Cheadle) and examined for Durham and Cambridge Universities.

Dr Lees was particularly interested in rheumatism, and in the early diagnosis of pulmonary tuberculosis. He was not a loveable man, by all accounts, but deeply cultured, fond of travel, and generally kind to students.

Dr Poynton is rather critical of his senior colleague in his memoirs;

“St. Mary’s Hospital. I knew him very well. Worked at Rheumatism with him, and dedicated “Researches on Rheumatism” to him, with Dr. Alexander Payne. Both he and Sir T. Barlow were “teetotallers” and non-smokers, but were very different. Indeed Barlow speaking of him some years after his death defined him well as “rather rigid”. He was of the Puritan type, with a fine forehead and large head and rather scraggy beard-reddish, a face full of good, but unattractive to children. A fine lecturer and learned, a determined student of medicine, he did much good work on heart disease in childhood. He was devoid of humour, but in no way greedy of success, or jealous, but full of enthusiasm. Not interested in games. He could be easily classed among human beings as one of those who represented the best side of the Cromwellian Type, but gave (as they did to irresponsible folk like myself) the feeling that life, if so serious, was not worthwhile. He had no faults, but the unconscious one, classical in this type, he was deceived by himself. When he took up a subject, that investigation must end as he thought it ought to end. He was obsessed by percussion, and many a child shook under his hammer-blows. He believed he could diagnose the earliest signs of Pulmonary Tuberculosis by deep percussion, with the result that a poor victim found suddenly that he had tuberculosis of all four apices. Lees honestly believed this - see what strange things we are! Could one imagine any famous doctor of his quality believing that deep percussion was the sure early diagnosis?  Nevertheless his great enthusiasm was inspiring, his friendliness great, and his love of the hospital great in its serious duty. Dr. Lees was very confident of the cost to blood-vessels of loose living, and no-one was further from loose-living than he. Yet strange to say during the war (he had left the hospital) he fell dead while examining a private patient, and had extensive arterial disease and probably a large coronary thrombosis. He was the greatest contrast to Cheadle, who was a born “doctor”, Lees a fine mathematician. Cheadle, Barlow and Lees were a fine trio on any hospital staff. All three so different in mind.”