Paying Patients at the Royal Hospital for Sick Children, Glasgow

Patients were supposed to be in possession of a 'line' (or recommendation) from subscriber before being admitted to the main Hospital. According the Hospital Rules, 'in all cases of competition in the recommendation of patients by donors and subscribers, a preference shall be given to the case which is most urgent'. In practice the absence of a 'line' was not an unsurmountable obstacle and many patients were indeed admitted without them, presumably on the basis of medical need. During the 1890s a decreasing number of patients were in possession of a 'line', according the admissions database. This 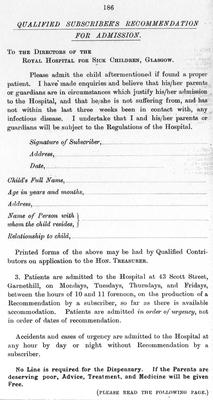 Example of a ‘Line’
Reproduced from the Hospital’s Annual Report, 1894
could be due to deterioration in record keeping, but could also indicate a changing policy to one where medical need alone dictated who got access to help. 'Lines' were never required in cases of accident or emergency or to obtain treatment at the Dispensary.

Unlike some voluntary hospitals which, by the early twentieth century were supplementing their charitable income through the admission of small numbers of paying patients, the Royal Hospital for Sick Children, Glasgow seemed only reluctantly to embrace this practice, the first provision for paying patients not being made until the early 1930s. Prior to that, the rule that access to the services of the Hospital were restricted to the poor was strictly adhered to, as a case from 1915 indicates.

In September that year Mrs Parsons wrote requesting that her children be admitted for removal of their tonsils, an operation which she had been advised they all needed. They had, she explained, recently returned home the 'East' and were not yet acclimatized to the bracing Scottish weather. As a result, rather than have the tonsils removed at the Dispensary (as would normally be the case) she wanted them admitted to hospital for several days, so their progress could be monitored. She explained that she could not afford the fees charged by a private home, where they could be sent to recover, and instead proposed making a donation or paying a 'small' fee to the Hospital instead. (Minute Book 6, 13 September 1915, p111)

Mrs Parsons was summoned to the Hospital. The Honorary Secretary advised her that paying patients were not admitted, it being a charitable institution for the treatment of the children of the poor. Only those who were unable to pay for their children's accommodation, medical or surgical treatment and nursing could be considered for admission. However, on interviewing her, the Secretary discovered that Mr Parsons had been a Tea Planter in Ceylon for a number of years, and that they had been forced to return to this country on account of his serious ill-health. They now had no means whatsoever, except a small allowance from the Planters Benevolent Association which would be exhausted within six months. Under these circumstances, the Secretary decided the case complied with the Hospital's criteria for admission and all the children became patients in the Hospital, free of charge. (Minute Book 6, 11 October 1915, p117)

However, medical practice was changing in the twentieth century and it became more and more common for cases to be dealt with within hospitals rather than in the patient's own home. In 1930, the question of admitting patients whose parents could afford to pay fees for medical treatment was discussed at the House Committee. It was agreed that patients should be placed in one of three categories: the first, accident and emergency cases, should be admitted without any question of ability to pay. If, subsequently, it appeared that the parents may be in a position to make a contribution, their case would be referred to the Almoner who would investigate their circumstances and make 'appropriate recommendation' with respect to making a donation. The second group of patients, were not emergencies but presented with a recommendation addressed to one the Hospital's medical officers. The decision to admit would be based on medical need only, but the almoner would be asked to investigate their circumstances in the same way as described above. The final group presented without a letter of introduction. Such patients (unless an emergency) would be placed on a waiting list and the parents investigated by the Almoner. If this revealed their financial circumstances did not require 'the aid of a charitable institution', the parents would be notified 'in as tactful a way as possible' that the child was not a suitable case.

This apparent discrimination against families with money to pay for care was highlighted a few years later, when in 1933, the following statement appeared in the Annual Report:

'It seems inequitable and unfair that those who are in need of, and are willing and in a position to pay for, the highly skilled medical and surgical treatment and nursing and the special facilities, personnel, equipment etc, to be obtained in a first-class Hospital should be debarred therefrom simply because they offer payment. Not infrequently such men and women are actually subscribers and help maintain the Hospital. The Directors submit that the special resources of the Hospital should be available for every child whatever the circumstances of the parents may be. Nursing Homes do not wish young children as patients, and children whose parents are poor have free admission to the Hospital. It is right and proper that provision should be made for children whose parents are able to pay, on the understanding, of course, that their treatment is not a charge on Charitable Funds, and that they do not occupy cots that should be available for children eligible for free treatment. There is no question of differentiating between paying and non-paying patients or of the one receiving better medical and surgical treatment or nursing than the other.' (Minute Book 10, House Committee Minutes, 9 June 1930)

Doctors had also been lobbying for private facilities in the Hospital, as a minute from May 1932 records: 'Junior staff in Hospitals were suffering from the want of private practice due mainly to the fact that institutional treatment had largely displaced treatment in the patients' own homes.' People of all calibers were now being admitted to other hospitals and as a result practitioners holding hospital appointments were having great difficulty in earning a living. The doctor suggested that before admission an assessment should be made of the patient's means and that those above a certain limit should not be admitted to the general wards but should be admitted to separate wards, kept entirely for paying patients. The doctor should then receive a proportion of the weekly charge. He offered the system in place at the Victoria Infirmary as an example, which had been entirely successful. (Minute Book 11, 31 May 1932, p104)

The debate about providing a private ward, separate from the main hospital wards, rumbled on, with the major stumbling block appearing to be the cost of establishing a physically separate facility for reception of such patients. It wasn't until the new Orthopedic Wing opened in 1956 that provision for private patients was finally achieved.