On 30 May 1882, Mrs Harbin wrote to Mr Andrew Macgeorge (the Hospital Secretary) asking for sanction to act in engaging nursing staff for the Hospital. She wrote from 10 Montague Place, Glasgow, the home of Mr James Whitelaw (the Hospital's Chairman of Directors) who was obviously providing her accommodation in her early days in Glasgow before the Hospital had opened.

As it is necessary to engage the Nursing Staff for the Hospital for Sick Children, I shall be glad to have sanction from you to act in this matter.

I propose to engage at least six trained nurses, three of these to be ladies. Salary to commence at £20. You giving me discretionary power to increase the same at rate of £2 per annum, according to length of experience and merit. Probationers, who may be ladies or others, to receive for the first year of training £12, the second £18 or £20 according to merit. They shall be bound to the Hospl for two years, the engagement only to be cancelled for any special reason, mutually arranged.

Full indoor uniform to be provided in addition to the foregoing. In addition to the above, there might be three Lady Pupils, who would be taken for not less than three months. Terms £12.10/- quarterly to be paid in advance, with part of uniform as usual

The washing for the Nursing Staff to be done in the Hospital Laundry.

I may add the above are the usual arrangements for the Nursing in a Sick Children's Hospital.

I shall be glad to hear from you at your earliest convenience.

After considering her request the Committee authorised Mrs Harbin to carry out the arrangements proposed in her letter and instructed the Honorary Secretary to tell her that in the case of the trained nurses, the proposed increase to salaries should be capped at £30, except in the event of special sanction of the House Committee. At this early stage the House Committee had not yet been formed and until such time as it was, all questions relating to the internal management of the Hospital were to be the joint responsibility of the Matron and the Medical Committee.

Mrs Harbin set about her task of recruiting a new nursing staff immediately. The first hospital ledger records the names and salaries of the sisters and nurses recruited from August to December 1882, before the hospital had even opened for patients. There were two sisters, three nurses and three probationers. The two sisters, Helen Dendy and Elizabeth Fisher, came with considerable experience and recommendations from the Royal Infirmaries of Glasgow and Edinburgh, respectively, Elizabeth Fisher having also worked at the Edinburgh Children's Hospital.

Ellen Gomme was the first to start work for the Glasgow children's hospital. The ledger notes that her pay (£20 a year) began in August 1882, although she did not arrive in Glasgow until November. She had travelled a great distance to take up the position, having gained her nursing experience at Great Ormond Street and then at Addenbrookes Hospital in Cambridge. She and Louisa Harbin would have known each other, as the latter was working as linen sister when Ellen first joined the London hospital in 1878. Mrs Harbin would also have known the matron, Catherine Wood, who wrote promising reports of Ellen's progress in her ward books. Ellen (or Helena as she was christened) was born and raised in London. Her father was a salesman for an oil manufacturer, and she grew up moving between the family home in Stoke Newington and her paternal grandfather's in St Albans. There is some confusion over her Christian name: being referred to as Ellen (actually the name of her elder sister) in hospital records at both Great Ormond Street and Glasgow, but as Helena in the census returns for the both hospitals.

The Glasgow ledger notes that Ellen agreed to come to the hospital initially only for six months, and Mrs Harbin must have been keen to have her on those terms. In the end she stayed a year, before leaving to take up a new job at 'Mrs Higginbotham's' Institution, a nursing agency which provided services to both the poor and paying patients. From there the ledger records she moved into private nursing on her own account, but then returned to the Sick Children's Hospital in 1890 as Night Sister, earning £28 per annum. She was absent for three months in 1891 (with no salary paid), probably on account of poor health, as in 1892 she left to return to England, stating her health would be better in the south. 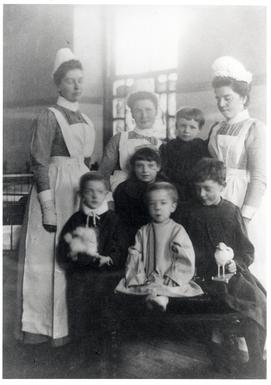 This must have been an exciting time for the young nurses, to take up posts in a brand new hospital and perhaps influence how nursing would develop. Two other women joined Ellen Gomme as nurses, Annie Ewen and Margaret Ronald. Annie was the oldest of all the new recruits, being 31 when she arrived in December 1882. She had been recommended by Miss Pringle, matron at Edinburgh Royal Infirmary, but she had to leave after a short time due to illness at home. Margaret Ronald, of Glasgow, had been two years at the Edinburgh Children's Hospital and came highly recommended by the matron there, Miss Peter. She stayed until December 1884 when she took nine months off to gain adult nursing experience at the Western Infirmary before returning to the children's hospital in September 1885. She left again in 1888, this time for a move into the more lucrative business of private nursing.

The remainder of the nursing staff comprised three probationers - very young women who arrived with no nursing experience whatsoever. Two were from Scotland, Mary Ewing of Banff (who came recommended by Mr Macgeorge himself) and nineteen year old Blanche Baker from Glasgow of whom nothing further is known. In a reverse of most migrations at this period, the third probationer (and the youngest, at 18 years and six months) moved up from London to take up her post.

This was the hospital's first nursing staff. Four of the women were Scottish, and three were from England, perhaps a reflection of their English matron (one could not be traced so her origin is unknown.) Their average age was 23 years and 6 months. None of them stayed longer than two years in the first instance. Three left to gain adult experience at nearby Glasgow or Edinburgh general hospitals, three left to work in private nursing and two left for health reasons (Helen Dendy, for her own health and Annie Ewen to take care of an sick relative). Three returned at a later date, Ellen Gomme, Margaret Ronald (who had left for adult training) and Helen Dendy, when her health had improved sufficiently.

Whether Mrs Harbin achieved her objective of recruiting at least three 'ladies' into nursing posts is unclear. It depends how the term 'lady' is defined. The records do not record the occupation of the nurses' fathers (which is one way of assigning social class). Of those women who have been located in census returns living with their families, Ellen/Helena Gomme's father was variously a 'traveller' (salesman) for an oil merchant or a clerk in the colonial service; Mary Ewing's father was a minister in the Free Church, Helen Dendy's father was a silk manufacturer and Eleanor Johnson's father, a sculptor. On the whole, these appear solidly middle class families, with the possible exception of Helen Dendy, whose family could have belonged to the upper realms of Manchester's manufacturing elite.