A Brief History of the Early Days of the the Royal Hospital for Sick Children, Glasgow

Glasgow was one of the last major cities in the UK (if not Europe) to acquire a hospital dedicated to children. At its formal opening ceremony in 1882, it was remarked that there were children's hospitals, 'even in Constantinople and such places of false philosophy.'

Foundation of the Hospital 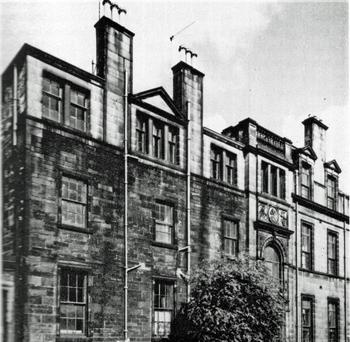 The idea for a children's hospital had been mooted more than 20 years earlier, in 1861, at a meeting attended by a group of medical men, clergymen and influential citizens. They were galvanized by the shockingly high infant mortality rate in Glasgow; and the emergence of children's hospitals in major cities across England and Scotland, particularly in Edinburgh the previous year. However, there was major opposition to the plan, not least from Glasgow Royal Infirmary, which objected on the grounds that it provided beds for children, and that specialist institutions were not needed. A more likely objection was a fear that the new institution would compete directly for charitable donations. Further obstacles were placed in the path of the children's hospital by the University, when a new infirmary was planned in the West End of Glasgow, under the University's auspices. It was suggested that the children's hospital could be situated on the same site - but arguments broke out as to who would control it - the University or the independent charity which was raising funds.

The Hospital's founders gave up on the University site and finally found their own building, a residential property in Garnethill, at the corner of Scott Street and Buccleuch Street. After much building work, including a whole extension to house the hospital's three wards, it was finally opened on 20 December 1882, and received its first patient on 8 January 1883. There were two medical and one surgical ward, which provided 58 beds for children aged 2 to 12. In addition, an isolation ward, separate from the main hospital, housed children with infectious diseases. There was a reception room, where children were examined on admission, and a bathroom where they were cleaned and dressed in ward uniform - provided by the ladies of a local church. On the top floor was a gas-lit operating theatre.

The first doctors, as elsewhere, were not employed by the hospital, but earned their living from private practice and were associated with major general teaching hospitals. They visited the hospital two or three times a week. The original visiting honorary surgeons to the Glasgow Children's Hospital were William Macewan and Hector Cameron. The physicians were James Finlayson and William Leishman (who was replaced almost immediately by Samson Gemmell).

The only resident medical officer was the house surgeon, but he was soon joined by a house physician: these included doctors who went on to serve the hospital for decades, such as RH Parry (house surgeon) and Barclay Ness, the first house physician.

One advantage to such a late start was that the hospital was able to establish from scratch a modern nursing department, unhindered by any old practices or retainers. From the start the authorities prided themselves on recruiting 'only ladies' as sisters, nurses, probationers and pupils'. When they advertised for a Lady Superintendent (who should be a lady, experienced both as a Lady Superintendent and a Housekeeper, have experience working in a children's hospital, and be aged between 30 and 40), they had 34 applicants. The successful candidate was Mrs Louisa Harbin. She came from Leicester Infirmary where she was working as a nurse, but previously she had been employed at Great Ormond Street, although in the capacity of linen sister and housekeeper. Louisa Harbin was an interesting choice, given that she didn't really seem to match any of their criteria (except that of age). She had experience in a children's hospital, but not as a nurse, rather as a housekeeper; she had no experience as a Lady Superintendent; and whether she could be described as a lady is a matter for debate. However, when one of the hospital's directors visited her at Leicester, he was very impressed, reporting himself, 'very well pleased with the clean and orderly state of her wards … Mrs Harbin's personal appearance and manners were agreeable'. Louisa Harbin stayed at the hospital until her retirement in 1903 - so she was in charge of nursing throughout the period of our study.

Like Great Ormond Street, the Evelina and the Alexandra Hip Hospital, the Glasgow Children's Hospital survived entirely on charitable donations, and its managers put a great deal of effort into fund raising. Its position in Garnethill gave it excellent access to the 'benevolent ladies' of Glasgow's prosperous West-End, and the Ladies Committee, composed of the wives of subscribers and their relatives, was relentless in its fund raising activities: bazaars, musical concerts, door to door canvassing; endowed cots were all familiar to supporter of this hospital and Great Ormond Street, alike. Subscribers were allowed to hand out recommendations ( or lines, as they were known locally) to patients, and such patients were supposed to take precedence in assigning beds. But as at GOSH, this practice was not popular among doctors, and one described it as 'the direct cause of many deaths'. In practice, patients were recommended by a medical practitioner and a suitable subscriber was found after the fact.

Potential patients soon began to outnumber the few beds available. In its first year the hospital treated 260 patients, and by 1886 458 had passed through. When the house next door became vacant in 1887 it was immediately purchased, adding a new ward with 12 beds, and the hospital continued to expand, adding another new wing in 1894. But by the turn of the century it still only possessed 74 cots - tiny in comparison to the demand from the ever growing city, of 2 million plus. Compared with great cities such as New York (which had 3 children's hospitals and 750 beds, or even Edinburgh and Aberdeen, both of which had more beds than Glasgow despite being cities of much smaller population), Glasgow's provision for its sick poor children was woefully inadequate. Once again the transition from identifying the problem to action was long and painful, but finally the decision was taken to move the hospital from its original location to a new site where a purpose built hospital could be erected. In 1914, the new hospital finally opened for business, at Yorkhill in west Glasgow, where it remains today (although it will be moving to a new location in south Glasgow in a few years).

In 1888, recognizing that an in-patient facility could never satisfy the medical needs of all the city's poor children, the hospital's authorities opened an outpatient department, or Dispensary, a couple of streets to the north of the main hospital. Here hundreds of children could be treated and advice doled out to parents. In 1889, over 4,000 cases (amounting to 16,000 visits) were dealt with by the Dispensary, and by 1890 more than half the hospital admissions were referred there by the Dispensary. The first woman medical practitioner to become established in Glasgow, Dr Alice McLaren, was on the dispensary staff. The Dispensary closed in the 1950s.

A further addition to the hospital's facilities occurred in 1903 with the opening of the 'country branch' at Drumchapel, now the site of a large (and notorious, if Wikipedia is to be believed) public housing estate. In 1903, the location was much more conducive to good health and gave 'the patients all the fresh air and sunshine possible'. This was not a convalescent home however, and was intended for those who needed active medical or surgical intervention. Minor operations were performed there. Most of its inmates suffered chronic conditions such as tubercular disease of the hip and stayed at the Country Branch for long periods.