On 1 October 1888, the Glasgow Hospital for Sick Children opened an out-door (meaning outside the hospital, rather than in the open air) Dispensary in West Graham Street, Cowcaddens, to provide free medical treatment and medicines to deserving poor children. The directors and medical staff wanted to treat as many children as possible without them being admitted to hospital, unless they were serious cases. They were also concerned that children were dying, or becoming incapacitated, from preventable causes, and that early treatment could alleviate this situation.

When the Hospital was originally planned, the directors intended that there would be a dispensary, but there had been insufficient funds to carry this out. The money was subsequently raised by Her Grace the Duchess of Montrose and members of the Ladies Committee who held a five-day 'Fancy Fair' at St Andrew's Halls in Glasgow in November 1884. It was a grand affair, with 17 stalls organised by 'great county ladies', selling expensive articles, fine art, antiques, jewellery, pottery, plants and soft furnishings. The ladies raised more than £15,000 and gave nearly £4,000 of this to build the Dispensary, the remainder of the money being invested.

Mr Whitelaw, a former chairman of the Hospital, and Mr Thomas Carlile, the current chairman, visited the main dispensaries in Britain before taking any decisions on the design and facilitities to be offered in the new building. Architect, James Sellars, was commissioned to design the Dispensary, which would provide a dispensing room, a large waiting hall, consulting rooms for physicians and surgeons and an isolation room for any infectious cases. Upstairs there was a ladies' workroom and living accommodation for the two sisters, the caretaker and his wife. 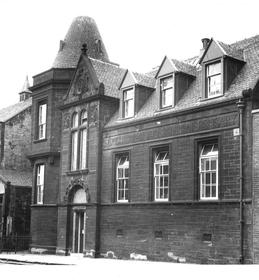 In 1897, a nurses' home and lecture theatre were added to the building and the interior layout of the Dispensary was changed.

The Dispensary was open for the reception and treatment of patients every day except Sunday, from 10 to 11. No subscriber's line1 was required - 'it is enough that the child is sick and poor'.

Around 150 patients were seen every morning by the Dispensary Physicians and Surgeons. An aorist, optician and dentist were also on the staff for consultations when required. Urgent and serious cases would be transferred to the Hospital for in-patient care, or placed on the waiting list for an available place. Medical students also attended to gain practical experience of children's diseases.

In the annual report for 1909, there is the following description of the type of cases treated: '[In the medical department] 25 per cent were treated for various forms of disease of the lungs, chiefly Bronchitis, Pneumonia, Phthisis, and Pleurisy; and 26 per cent for derangements of the organs of nutrition, such as Diarrhoea, Gastric and Intestinal Catarrh, Debility, Atrophy, and Dyspepsia. In the special departments it may be noted that 227 cases of affections of the Eye, 168 of the Teeth, and 76 of the Ear were treated.'

Day surgery was also carried out at the Dispensary, particularly for tonsils, hernias and cleft palates. Over 2,000 operations were carried out under anaesthetic each year. Dr James H Nicoll, a Dispensary Surgeon from 1894 to 1914 and Professor of Surgery at Anderson's College, was a pioneer of day surgery. Between 1899 and 1908 he performed over 7,000 operations for conditions as diverse as tubercular joint disease, talipes, hare lip, cleft palate, mastoiditis, hernia and spina bifida. In 1899 he successfully operated on a six week old infant who had pyloric stenosis (BMJ 1900,ii, 591-593).

The nurses provided electric battery and massage therapy, while an X-ray machine (the gift of Dr William J Fleming) was installed in 1901 to aid diagnosis. Dr John Gilchrist was appointed the Honorary Medical Electrician to take charge of the apparatus.

Fully-trained nurses staffed the Dispensary. In 1909 there it employed two sisters and two nurses and later, as the workload increased, probationers were drasfted in to ease the workload.

In the afternoons, the Dispensary Sisters made home visits to patients to provide continuing care, particularly to see that the Doctor's orders were carried out, and that surgical dressings were properly applied. They also gave health, hygiene and nutrition advice and were authorised by the Ladies Committee to assist the poorer cases with milk, beef-tea, and surgical appliances. However, no case was relieved without investigation being made by the Charity Organisation Society.

Between 1888 and 1918 the sisters visited 17,171 surgical and medical cases and made a total of 38,432 visits.The Sisters did the work of an Almoner (medical social worker) until 1915 when a hospital Almoner was appointed.

Sister Laura M Smith was Sister in Charge of the Dispensary from 1892-1922.

In 1911 she cooperated in the establishment of The Sister Laura's Infant Food Co Ltd, which marketed a proprietary infant food based on a recipe she had used at the Dispensary for years. She was reprimanded by the RHSC directors for becoming involved with the company and for using the name of the RHSC in the advertising, but did not lose her job. 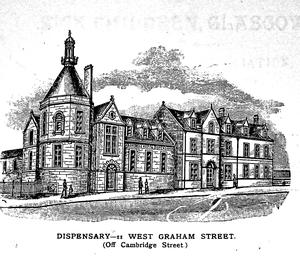 Most years, at Christmas, children attending the Dispensary were entertained to a special tea, entertainment and a visit from Santa, organised by the Ladies' Committee.

When the RHSC moved to Yorkhill in 1914, an out-patient department opened in the new hospital, but the West Graham Street unit continued to provide services to poor children. The work of the two units grew steadily, reaching a peak of 102,466 attendances in 1933. During the 1920s and 1930s the work of the Dispensary diversified to include physiotherapy, a department for skin diseases and a speech clinic.

In Jan 1953 the Dispensary and the hospital out-patient joined together in a new Out-Patient Department at Yorkhill. The Dispensary closed and the building was thereafter used by the clinical physics and bio-engineering department of the Western Regional Hospital Board. The building (without the nurses' home extension) is still extant, now used by Glasgow School of Art.

1 A subscriber's 'line' was a certificate issued to subscribers which they were at liberty to give to deserving cases which gave the access to the hospital proper. In theory patients could not be admitted without one (and gave holders preference over patients without such a recommendation) but in practice medical need usually overrode over considerations.