The Country Branch at Drumchapel

By 1900 the Glasgow Royal Sick Children's Hospital was suffering from a shortage of accommodation. With an average of 80 patients on the waiting list at the end of every month, and patients referred from the Dispensary unable to be admitted, something had to be done to alleviate the situation. There was no room for expansion on the hospital's current site, so another solution had to be found. The Directors reported in 1900 that one of the Ladies' Committee, Mrs J L Mackie, "whose kind thought practically suggested the idea of the Country Branch has offered £1,000." There were other donations, but the bulk of the money, around £6,000, came from Miss Montgomery Paterson, to build a Country Branch of the Hospital, in memory of her parents, the late Mr and Mrs Montgomery Paterson.

The Country Branch, built on an elevated site near Drumchapel Station on the North British Line to Dumbarton, was completed and occupied in the end of June 1903. It had two large, airy wards with twelve cots in each. The lower ward had a sunroom about 40 feet long by 10 feet wide with large glass windows and folding doors, into which the cots could be wheeled. Access was also had from the upper ward to the roof of the sunroom, (surrounded by a stone parapet) so that the children could get as much fresh air and sunshine as possible. Children with certain types of medical cases and surgical cases, either before or after operation, would be taken from the Hospital in town, thus relieving the beds there and giving the patients the chance of a quicker and more complete recovery in the country air than they would have in Glasgow. However, it was not to be used as a convalescent home. 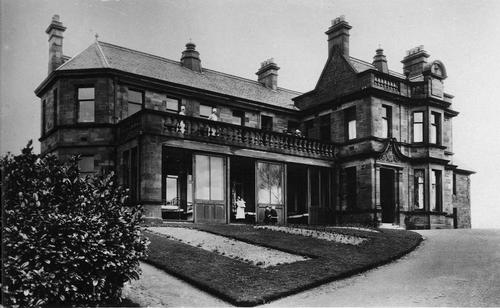 Depending on the severity of their conditions, children spent anything between thirty days to one year there, under the care of the Visiting Physicians and Surgeons from the Hospital. The Directors wanted children to be cured as far as possible so that they were less likely to have a relapse and end up back in hospital. 1404 children were treated there between 1903 and 1914, the cost of treatment per patient in 1914 being £14. Children were taken in an omnibus from the Hospital on Friday mornings at 10.am, and it would return to the Hospital with children who were going back for treatment at the Hospital, or being discharged home or to a convalescent home.

Visitors to patients were allowed on Saturdays from 5.30 to 6.30

The Sister in Charge had full control of the administration, nursing and domestic staff, housekeeping, accounts, stores and notifying any maintenance required, but was responsible to the Matron, having to consult with her on any matters of doubt or importance. Matron also visited at least twice a month. Sister Chris (Miss Allan Dow) was the first Sister in Charge, but she had several periods of ill health, and resigned in 1909 citing the state of her health as the main reason.

The Country Branch was staffed by a ward sister, staff nurse, two second or third year nurses and two probationers. A few of the nurses lived in Rosebank Cottage, in the grounds, along with the gardener and his wife. 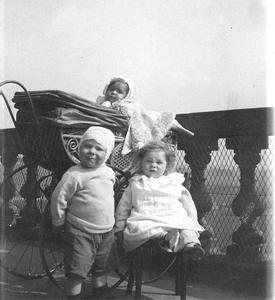 From 1905 members of the RHSC Ladies Committee gave lessons to the children two or three days a week as they were concerned that children receiving extended care were missing out on their education.

The Country Branch was extended in 1930 to have three main, south-facing, wards and two small isolation wards and a nurses' home. There were large verandahs, the intention being that the children would live in the open air as much as possible. The windows of all the wards were glazed with Vita glass, which allowed the beneficial rays of the sun to pass through, thus benefiting the children as if they were in the open air.

Enemy landmines caused damage to the buildings in May 1941. No-one was injured, but the patients and staff were evacuated to Lennox Hospital, where they remained for several months until the Country Branch was repaired.

A geriatric unit was added in 1968 and the children's unit closed in the 1980s. The original buildings were demolished and the site is now Drumchapel Hospital, a hospital for older patients.