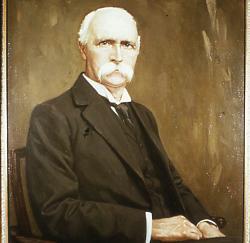 William Macewen was born near Port Bannatyne on the Isle of Bute, Scotland in 1848. He studied medicine at the University of Glasgow, receiving his MB,CM in 1869 and his MD in 1972. During his student days he trained under Joseph Lister. He became a Fellow of the Faculty of Physicians and Surgeons of Glasgow (1874).

Macewen had been greatly influenced by Joseph Lister (1827-1912), who revolutionized surgery by developing the antiseptic approach, thus decreasing drastically the high mortality of surgical patients due to infections. His approach, following Lister, was to emphasize the importance of cleanliness and he adopted systematically the use of scrubbing (deep cleansing with disinfection of hands and arms), sterilization of surgical tools, and the use of surgical gowns. Macewen became one of the most innovative surgeons of his time and was able to greatly advance modern surgical technique and improve the recovery of patients. In addition to embracing antiseptic and then septic surgery, he was also a pioneer in the newly emerging skill of anaesthesia in surgery, developing the technique of endotracheal intubation for the administration of new anaesthetic agents.

Macewen received many honours and distinctions during the course of his career. He received the honorary degree of LLD from both Glasgow and Liverpool Universities, was made a Fellow of the Royal Society in 1895; an Honorary Fellow of the Royal College of Surgeons of England in 1900; Companion of the Order of the Bath in 1917; and President of the British Medical Association in 1922. In addition to this array of honours, he was knighted in 1902.

Why did he have such widespread recognition? The answer to this is that he was and innovative, meticulous and brilliant clinician and surgeon who was ready to accept new challenges. One area in which he was seen to excel was in orthopedics - especially in the correction of deformation caused by rickets, a prevalent disease at the time. Other particular successes were in the radical cure of hernias; the introduction of operations on the brain and the spinal cord (he has been called the "Father of Neurosurgery"); and in pulmonary surgery for the management of patients with endemic tuberculosis or cancer.

William Macewen was appointed as one of two surgeons to the new Hospital for Sick Children in Glasgow on its opening in 1882, along with Hector Cameron and William Fleming, as a back up. In January 1883 Macewen was the first surgeon to operate in the Hospital and the records of his patients remain in the Archives of the RHSC. His special interest was in the correction of the sequelae of rickets, which was a common problem, but although orthopaedic procedures were common he performed all aspects of general surgery in the Hospital for Sick Children for the next decade. He terminated his appointment with the RHSC in 1992 when he was appointed to the Regius Chair of Surgery, and was succeeded by his understudy, William Fleming.

His intense interest in orthopaedics continued throughout his career. In 1916 Macewen helped to found the Princess Louise Scottish Hospital for Limbless Sailors and Soldiers at Erskine (now the Erskine Hospital), near Glasgow. This was urgently needed to treat the thousands of servicemen who lost limbs in the First World War. Macewen was its first surgeon and with the help of engineers and workers of the nearby Clydeside shipyards, he designed the Erskine artificial limb. He trained a team of pattern-makers to manufacture them for the hospital.

Macewen was noted for his early and creative use of photography in documenting patients' cases and for teaching surgery and medicine. He pioneered the use of photographs of body parts and pathological specimens, as well as photographs taken before, during and after treatment and surgery.

Essentially a very private man, Macewen lived at Garrochty on the Isle of Bute until his death in 1924. He was buried nearby in the churchyard of St Blane's Chapel.