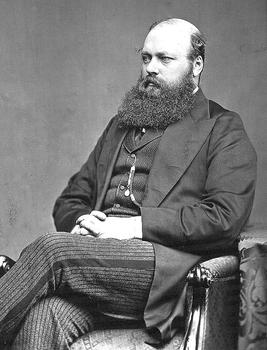 William Leishman's father was the minister of the well known Govan Old Parish Church in Glasgow. He studied medicine at Glasgow University and graduated MD in 1855. After graduation he settled into general practice where he developed a special interest in midwifery and gynaecology. He was soon recognised by his professional colleagues as an authority in these departments. Leishman was co-editor and then editor of Glasgow Medical Journal between 1862 and 1876 when Joseph Coats, the first pathologist at the Royal Hospital for Sick Children, replaced him. In 1863 he was appointed Professor of Medical Jurisprudence at Anderson's College, and he began to specialise in obstetrics

He was physician to the Royal Infirmary and to the Glasgow Royal Maternity Hospital. In recognition of his ability and expertise in obstetrics he was appointed to the Chair in Midwifery at the University in 1868. He also held the post of physician to the Dispensary for Diseases of Women at the Western Infirmary and was a Fellow of the Faculty of Physicians and Surgeons, Glasgow.

When the new children's hospital opened in 1882, he was appointed as one of its first two physicians, but only held the post for two years. His heavy commitments to the General Medical Council forced his resignation from the children's hospital. In the General Medical Council he was on the Education Committee which drew up guidelines for medical training in universities, to harmonize training periods between schools. Leishman had also made important contributions to the running of Glasgow University through his participation in the Senate and the Court.

Leishman was a prolific writer. His 'The Mechanism of Parturition' published in 1864 was a forerunner of the book which became the standard text of that period -System of Midwifery. The book ran to four editions in Britain and three in the United States, indicating its popularity. He produced many other publications, not all confined to his own specialisms of obstetrics and gynaecology.

The name Leishman has an eternal place in medical language but this is from the achievements of his son, Sir William Boog Leishman, who among many achievements gave the world the term Leishmaniasis, a disease caused by protozoa.

Obituary notices illustrate the high respect afforded him by his colleagues and ex-students.